In the wake of revelations of American domestic surveillance of private messages I started to think about message encryption. Modern computer technology allows the creation of unbreakable ciphers; however, with enough processing power almost any cipher-text might be broken. For the past fifty years, with the rise of credit debt, we have given up our right to privacy. The Internet is not secure. Personal information is bought, sold and stolen at will. Sophisticated encryption software is available for use in electronic communication; however, using it may bring unwanted attention from the boys deep inside the “Puzzle Palace.” It seems today that even living in a cabin in the deep woods does not protect you once you communicate with the world at large.

One story from World War Two has always interested me. The German High Command used a device called the Enigma Machine to encode messages sent by radio and teletype. The machine used electro-mechanical rotors that could be re-oriented daily to produce coded messages that the Germans thought unbreakable. The British thought otherwise and successfully broke the German code, providing great military advantage.

My “Paper Enigma,” based on the rotor concept used by the German Enigma Machine, is a working cipher generating machine capable of producing cipher-text and converting cipher-text back to plain-text or understandable language.

“The Paper Enigma” contains three paper rotors, Red, Blue and Yellow, each with ninety divisions. Since this machine is manually operated the rotors are set by hand. Three sets of ninety ciphers each, NUMERIC, ALPHA-NUMERIC and ALPHA-ALPHA are arranged randomly over the three rotors. Three alphabets, sequential, random order and numeric, are arranged over ninety positions that correspond to the ninety positions of the index outer circle. When the red, blue and yellow rotors are aligned with a predefined key the cipher sets that appear in the sliding window can represent the plain-text letter that they correspond to. The person receiving the coded message will align their rotors in the same position as the sender's and decode the message by using the sliding window and the cipher index that gives the rotor and position location of the cipher counter-clockwise from the index mark on each rotor. There are over 700,000 different positions for setting the rotors. Complicated encryption can be produced by using both random and sequential plain-text alphabets and multiple pairs of ciphers. Seven blank positions are provided across the three rotors that can also be used as ciphers in combination with adjacent cipher pairs.

Cipher-text can be arranged many ways, in groups of five letters or numbers, or any other length, or as a continuous stream. The possibilities are endless.

Although “The Paper Enigma” can produce cipher-texts that would be very difficult to break manually, it probably could easily be broken by today's Puzzle Palace boys, so be careful, the NSA is watching you. 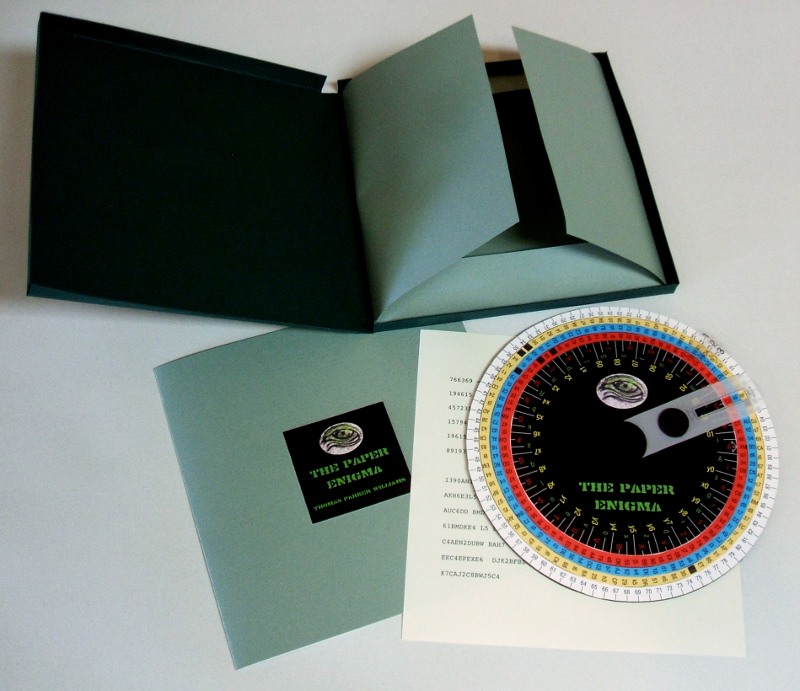 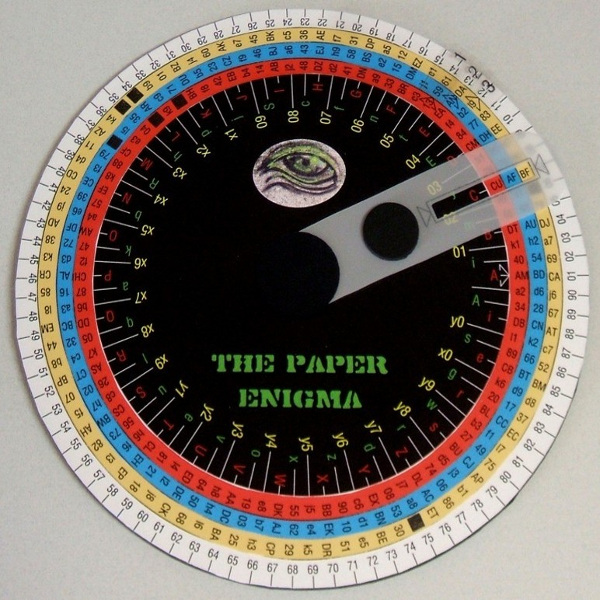